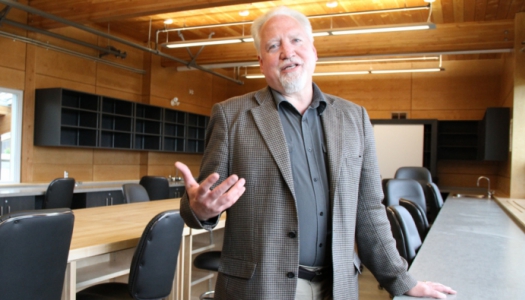 What started as a Royal Roads thesis is becoming an invaluable resource for Canadian municipalities keen to promote solar power.

Alumnus Bob Haugen recently launched the Canadian Solar Cities Project, a non-profit organization dedicated to promoting solar energy across the country and recognizing cities that are leading the charge.

To become a solar city, municipalities must meet 10 criteria, such as establishing a climate change plan with short- and long-term targets and timeframes and offering incentives for residents who use solar electricity and solar thermal energy. Haugen developed the criteria as part of his thesis in consultation with Canadian solar leaders, the federal and provincial ministries of environment and representatives from 18 municipalities. He also reviewed international models. Haugen determined there is great interest from cities for more guidance and support when it comes to promoting solar energy.

“A lot of cities have been asking, ‘How do we do the next level of organized sustainability?’” he says. “That really is what it’s about, organizing the sustainability efforts and quantifying them and setting a benchmark to see how much greenhouse gas can be saved by implementing these 10 items. It’s something to shoot for.”

To become a solar city, municipalities are required to complete a form demonstrating how they meet each of the criteria. Successful solar cities will be promoted on Canadian Solar Cities Project’s website, which is under development, and will be able to use the logo in their communications.

“It’s a way of focusing people’s attention on a concrete way to achieve a goal,” he says. “By achieving the Canadian Solar Cities designation, municipalities are achieving a lot of things in the process and that’s where the value is.”

The first solar city, Dawson Creek, B.C., was announced last month. The city sponsored Haugen’s thesis, with funding provided by the Infrastructure Planning Grant Program, which is financed by the B.C. Ministry of Community Services. Dawson Creek is a leader in promoting solar energy and using it, Haugen says. The city has solar hot water and solar photovoltaic systems on many public buildings, solar panels on street lights and bus shelters and a regulation that requires all new homes built in the city to have conduits that allow for the installation of solar hot water.

Haugen had long been a resident of Dawson Creek and worked at Northern Lights College as manager of the clean energy program until retiring last month. He recently moved to Victoria and will now be focusing on his role as executive director of the Canadian Solar Cities Project – and trying to get approval from his condo association to install a solar hot water system on the roof.

Haugen says B.C. communities are leading the way in solar installations, in large part thanks to SolarBC. He estimates about 20 B.C. cities meet some of the criteria, along with a few in Ontario. Innovative approaches have been seen in places such as Sooke, where the First Nations are energy self-sufficient and have at least a dozen solar installers, who were trained at Northern Lights, among their members.

“This is something that I believe in,” he says. It’s also something the Royal Roads community believes in.

“I greatly encourage this kind of third-party recognition of municipalities taking action towards climate change,” says Nancy Wilkin, director of Royal Roads’ Office of Sustainability. “Our hope would be that the City of Colwood, which Royal Roads is partnering with on the Solar Colwood program, would become the next Canadian Solar City.”

“I am really impressed that Bob has been able to make such an impact,” adds Prof. Niels Agger-Gupta, who offered Haugen advice along with his thesis adviser Guy Nasmyth. “He’s really learned the process of taking a study and applying it in a real way. I see that as a shining example of how our program can be very successful.”

Haugen says his professors encouraged students to do a project that could actually be implemented and have a positive impact.

“It’s a wonderful, wonderful program,” Haugen says of his Royal Roads experience. “You learn so much about yourself and about what motivates people. It was really excellent.”